Apply For A Loan 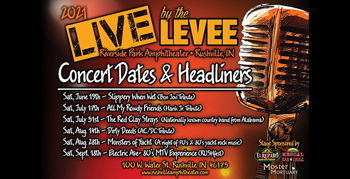 Live by the Levee - Slippery When Wet

Slippery When Wet (Bon Jovi Tribute) will open the Live by the Levee series on Saturday, June 19. Slippery When Wet has played more than 1,500 shows throughout the U.S. alone and has traveled to Africa, Mexico, Singapore, Puerto Rico, Honduras, and the Dominican Republic. They have headlined on more than 60 cruises on the Royal Caribbean cruise line and played the Super Bowl 48 Pregame Show in East Rutherford, N.J., in 2014. The band’s shows are the most attended and highest grossing of any Bon Jovi Tribute in the country. Hope to see you there!

You are leaving the Citizens State Bank website. The site you have chosen is independent of Citizens State Bank and we cannot attest to the accuracy of information provided by linked sites. Linking to a website does not constitute an endorsement by Citizens State Bank, or any of its employees, of the sponsors of the site or the products presented on the site. The Bank is not liable for any failure of products or services advertised on the third party site. Each third-party site may have a privacy policy that is different than the Bank’s policy. The linked third-party website may provide less security than the Bank’s website.